In December 2020 Matt and Julie Bell completed their fourth major renovation and cinema launch in 13 years, taking Focal Point Cinema & Café from 3 to 70 employees, and from 2 screens and 56 cinema seats to 12 screens and 893 seats.

The new Palmerston North Focal Point Cinema and Cafe features four separate cinemas showing 120 movie screenings a week, a function/dining room for up to 50 people and a large cafe.

“I wanted to own a business where I could integrate marketing into it. When you work for someone else you have to convince the people above you to look at your ideas, in your own business you can just go ahead and use them!”

The formula for Focal Point was a central location, distinctive branding, intimate theatres with comfortable seats, barista coffees and cake, platters and wine. The couple bought a property in their hometown Feilding and set to work.

Matt, then a full-time Registered Valuer and part time Mangamahu cattle farmer, was put in charge of practical stuff on the renovation including designing a prototype for the cinema seats for friends to try when they called around.

It was around this time that Matt approached AllanMcNeill Principal, Phil Harre to take over as their accountant.

“I met the AllanMcNeill Principals one night out on the beers at Murry’s Irish Bar and liked them straight away,” says Matt.

The couple say enjoying a friendship with Phil, and in fact the whole AllanMcNeill crew, is an added bonus when he does such a great job at managing the complexity of their accounts.

In May 2007 after a major 18-month fit out, Focal Point Cinema and Wine Bar was born with a 40-seat and a 16-seat cinema, and it was an immediate hit with the Feilding locals.

For that first year Julie worked in the Feilding business almost every night giving her invaluable insight into what customers did and didn’t like. The first change was the Wine Bar concept soon change to Café as meals become an important part of the mix.

“I noticed wives dragging husbands in straight from work and they weren’t that satisfied with getting a platter to eat for their dinner! So we started a simple blackboard menu and today we have a full menu as well as cabinet food.”

The opportunity to refurbish and lease an existing cinema in Levin came up in 2010. Matt gave up his valuation profession and joined the business fulltime. For a time Matt managed Levin while Julie was in charge at Feilding.

Just before the couple embarked on the massive re-brand and renovation of Focal Point Hastings in 2013, Julie’s business mentor group reviewed their operation. Their conclusion was Julie should be General Manager handling business strategy, staff and overall operations, Branch Managers should be put in place at each cinema location, and Matt should be given more rein to work on business growth and development as well as run the movies side of the business. The couple agreed and implemented the changes straight away.

“She’s the ultimate boss,” laughs Matt, who is now based at their home office and spends time each week in Palmerston North overseeing and occasionally picking up tools for the rebuild.

Meanwhile Julie has fully transitioned to hands-off management, working closely with her Branch Managers to put in place hers, and their, marketing ideas.

“I think one of the biggest satisfactions we’ve had is seeing people grow. Megan started with us washing dishes, now as our Feilding Branch Manager, she is running 14 staff.” 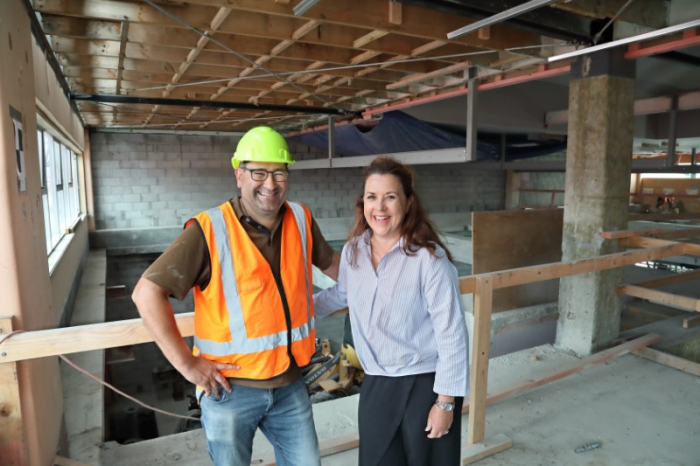